SHADOWS OF ESTEREN Brings You Ghosts!

Twas the news before Christmas…

…and all through the land, gaming news just kept on coming, no end in sight to be had.

Lots of stuff going on; I, personally, am headed to my brother’s house for Christmas dinner with my mom and my nieces and nephews tomorrow. I know that 8-player Buzz will be had by all, and probably some four-player COD:MW2 action. Family get-togethers are usually better when you can knife your family in the back. I’m just saying.

Those wacky Brits are at it again. 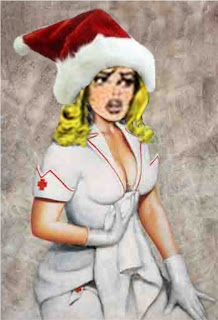 A British Doctor is warning athletes not to use videogames the day/night before a competition. His justification is a test group of children playing need for speed for 60 minutes, stating that his conclusions showed a majority of them having irregular sleep patterns. His words:

1. It’s cause you made them play NFS for 60 minutes. I’d not sleep well with that kind of torture, either. 2. What did you say?

See, here’s what I don’t get: Everyone slams the British healthcare system (why would we EVER want something like that here in the USA), but then listen to the doctors who work for that same system. I generally steer clear of politics, but this does seem like a rather blatant bit ‘o hypocrisy. In other news, I generally find Ars Technica to be even-handed and judicious with their reviews and opinion pieces. So when I found this link about Guitar Hero: Van Halen and it’s rather …direct assertions about the game/franchise… well I couldn’t stop giggling. A direct quote:

If you still want to give this a try, just wait a week or two; this will hit the budget bin even fast than Guitar Hero: Aerosmith, and that game was released in a tailspin and never recovered.

Oh, and for the record, unless I am talking about how Activision is a set of corporate mongerers, this is the one and only time I will ever mention the words ‘Guitar Hero Van Halen’ on the site.

Then there is that little JRPG across the seas that you’ve probably never heard about called Final Fantasy XIII.

It’s apparently shattered every sales record possible for software in Japan, and kotaku is reporting that it’s sold 1.5 million units in just four days, and upspiked PS3 sales by 200,000 in one week.

In the pen and paper realm of gaming, I stumbled across a cute set of amusing stories over on ENWorld, written by Johnny Nexus called Game Night. It’s enjoyable and pretty-well written. Like the guy had played in a few RPGs himself. There are six chapters published so far, and I recommend giving ’em a looksee.

After the turn of the year, I’ll be starting a Warhammer Fantasy Roleplay Campaign with my Monday night group. I’m currently running 2nd edition. The rules are simple, and combat is generally a failure of RP and can be VERY deadly. My group had been running D&D 4E, but I am fatigued as a GM by the lack of solid story given to the premade campaigns (I don’t really have time to invest in making an entire campaign from scratch). Most of my group died in our last D&D session (read: it’s hard, not that I was TRYING to kill them). So we’re going to start this new game after the 1st and return to D&D somewhere down the road. The reason I bring all this up is because one of my monday night gamers is very big on the new 3rd edition of Warhammer Fantasy brought out by Fantasy Flight Games.

It uses several types of dice sets and cards to keep track of information, and one of the D&D game designers has given it a review that I think is more than read-worthy here.

In movie news, I’m hearing all kinds of buzz about the new

I’ve heard a lot of criticisms over the fact that apparently Holmes in this movie has a large repertoire of martial arts/boxing skills. The funny part, to me, is that having read the Doyle books personally, the man definitely knew Queensbury rules boxing and liked to try to keep his body as active and honed as his mind. I don’t think martial arts would be a stretch, as it is the thinking man’s fight. Intellect and strategy are just as important as how strong you are.

[/ENDMINORSPOILERS]
So, I am greatly anticipating seeing this, I’m liking the hearsay from advanced screenings.

….and then there’s this:

This is going to be the James Bond reboot of Robin Hood. Put a thug in it and call him refined and a champion of the people. FortheloveofallthatisgoodandholyNO! comes to mind.

Lastly, in tech news, there are all kinds of rumors swirling once again, but it would appear several sources are confirming the 7″ Apple tablet, and that the hardware maker has asked several companies to prepare their iPhone apps to work on a larger display for a conference in January.

Also, before I forget, let me wish each and every one of you a very Merry Christmas. It is the end of a decade; a time to close all things and open new chapters.

Here’s my best early morning Christmas cheer that I could muster:

Star Trek Online: Re-assimilation.
Be the first to comment!
Leave a reply »