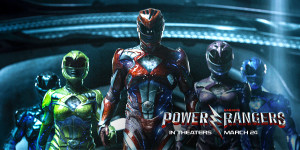 Power Rangers released March 24th, 2017 by Lionsgate. It was an entertaining movie that while good and overall well worth watching, felt a little rushed during the second half.

Power Rangers was a good Breakfast Club-esque feel movie about a group of five misfit teens who bond over common issues. One commonality happened to be special coins bestowing them super powers — making them the Power Rangers, destined to protect the universe.

The first half of the movie was paced well and gave enough time for each of the five main characters to develop their backstory. The second half felt slightly underwhelming, although the film did allow you to see their cialis motivations here and why they are considered screwups or outcasts. The real fight occurred during the last 15 minutes of the movie and was lacking.

While the story focused on them uniting as a single force against a common evil to overcome the odds, it seemed to be lacking a lot of the action I was hoping for. The film does a good job throughout of helping you learn where they stand on the social ladder — and where they feel they should be. Current social issues are interwoven into the script well, tackling sexualism, sexting and other connections to the current generation discovering The Power Rangers for the first time.

The movie wasn’t campy and it didn’t feel overtly 90’s. It was a good action movie, and it had good jokes, good humor, good action, and pretty decent CGI. It enjoyed its roots and didn’t try to embrace them ironically. They took the same formula that Marvel and what appears to have in every new action movie – quippy remarks, corny lines, and action with flashy scenes and decent scripts. I think some people might be put off by how different it is from the 90’s television shows. When I think of the 90’s Spiderman and I think of the Power Rangers; even though both are teenagers fighting villains that threaten the world, these Power Rangers are different. This new group is more mature, with real issues, real grit, and real plot.

That being said, it’s hard for me to seriously debate plot points at times when the whole movie involves super heroes who take their powers from coins and control fighting robots. If you are able to separate your nostalgia from this version of the team, I think it’s a great watch.

The CGI of the Zords and the uniforms were better than anticipated. I could tell that a lot of the items and creatures were built to be marketed for toy aisles. They left a lot of room for future villains and future markets in what I’d assume was the studio’s test to see if we’re ready for Power Rangers. The fighting sequences were choreographed nicely and didn’t feel like everything was done on a green screen.

The ship/base of the rangers was very well done and even Bryan Cranston’s face was updated/made realistic in the ship’s video wall. Bill Hader brought Alpha 5 to life with sarcasm and tone that didn’t feel like he was reading a canned script. Everything felt distinct, the villains felt extra-terrestrial and the Power Rangers felt like super heroes. If the new Ninja Turtles could sell like it did, the new Power Rangers should far surpass it. I hope for the studio’s sake that people give it a chance, because I enjoyed it.

The movie was always moving and never felt like it was dragging. Some points seemed to fly and cut to a resolution for the specific scene, but it never felt like it sacrificed plot. If you want a good movie reminiscent of your childhood that is good for you and your kids, then this is it – introduce them to The Power Rangers! I’d give it an

It’s missing the last two Zords because the ending felt like some of the action sequences were left on the cutting room floor.

The Power Rangers Take On NYC

The Night the Lights Went Out in Georgia (and Everywhere Else, Too)