My name is Justin AKA “Mr J Nice” on PSN and I am writing my first article for Gamersledge.  My gaming background is where I believe you really care.  I started playing games, earliest I can remember, when I was 12.  My parents got me a Sega Genesis with around 20 games.  These ranged from Echo to Mortal Kombat to Simpsons and Toe Jam and Earl (my 2 favorite games from Sega).  I played that for 3 or 4 years until I got a Play Station 2 and a Game Boy Advanced.  I played Pokémon, just to play but never competitively.  I played those for several years until I moved to the Xbox 360 where I played Call of Duty and the Battlefield Series.  From there out I played WoW.  I have been playing WoW for the better part of 7 years, Off and On in the last 2 with more off than on.  I enjoy MMO’s and FPS’s, rarely if ever have I really, and I mean really, wanted to play a Single player game.  The only campaign in the last 4 years that I have ever completed was Battlefield Bad Company 2’s campaign.  With that being said I traveled to GameStop Expo 2014 With Dan Aka Trialaccess and found the Game that can change that all!  Well change it all for me that is.

Let’s start this off with a few facts about Middle-earth: Shadow of Mordor.  This game will be releasing September 30, 2014 for PlayStation 4, Xbox One and PC/Steam.  Unfortunately optimizing the game for Xbox 360 and PlayStation 3 has required them to push the release for those consoles till November 18, 2014.  Warner Brothers Interactive Entertainment is publishing this game.  The developers are Monolith Productions, most recently known for F.E.A.R. 2, Gotham City Impostors, and Guardians Of Middle-earth.  I was able to get the distinct pleasure of meeting the man who led the development team of this Game Mr. Bob Roberts.  Bob is a wonderful gentleman who you may or may not have seen the video interview with.  He has a great amount of passion about this game and really wants those who play it to get to enjoy all the hard work that has gone into it.  There are so many features that I will list, please feel free to skip through till you find a part that fascinates you.

“Middle-Earth: Shadow of Mordor delivers a dynamic game environment where the player orchestrates their personal plan of vengeance as they bend Mordor to their will.  The game begins on the night of Sauron’s return to Mordor, as his Black Captains brutally execute the Rangers of the Black Gate.  Players become Talion, a ranger who loses his family and everything he holds dear, only to be returned from death by a mysterious Spirit of Vengeance.  As Talion’s personal vendetta unfolds, players uncover the mystery of the spirit that compels him, discover the origin of the Rings of Power and confront the ultimate nemesis.”  This was a little synopsis of what you may come to expect in the game.  We were given information about the background and where the setting is placed.  “A new story set between the events of The Hobbit and The Lord of the Rings, Middle-earth: Shadow of Mordor delivers a vibrant next-gen game world through its Nemesis System.  Every enemy players face is a unique individual, differentiated by their personality, strengths and weaknesses.  These enemies are shaped by their encounters with the player to create personal archenemies who are unique to every gameplay session.  Players must outthink each distinctively different enemy they encounter to infiltrate the ranks and dominate within the dynamic world that remembers and adapts to their actions and choices.”  So much of the last quote (provided by Warner Brothers) just barely grasps the uniqueness that this game has.

Wraith Powers is a unique way to fight and live in this world of Mordor.  Wraith has several different characteristics about it.  It can be used to brand an enemy allowing you to force your memory into their mind and gather intelligence from the memories in theirs.  If you can get to an enemy and touch them, you can grab them and “brand” them.  This will allow you to take them over, big cave troll perhaps, and see what they see.  This can help you find an enemy that you wouldn’t normally be able to, whether it is due to line of sight or pure madness!  Using wraith you can use brutal melee, ruthless stealth and vicious ranged attacks. Things are easier when you bring a Cave Troll to a Spear Fight!

Dominate Your Enemies using wraith powers you will be able to tell an enemy’s weakness.  Tell what their strengths can be so you don’t enrage them by mistake.  With Middle-earth:  Shadow of Mordor you get a new era of enemies.  Gone are the days of Orc number 5 and Orc number 8 who you see fighting in the starter zone and in the level 5 zone and the level 10 zone and so on.  With ME: SoM enemies are as unique as you are.  Let’s say you are level 4 and fighting a pack of four Orcs.  All of which are unique by the way.  You kill three of them and one runs off (this will come into play in a second). Wraith, Not even once!

The Nemesis system is a unique enemy building system created for this Action RPG.  Remember that one Orc that you let get away? He has been surviving and fighting since that event.  He has been harnessing his skills and fighting his way up the ladder so he can one day get his revenge on you.  With ME: SoM each zone has five War chiefs and twenty lieutenants all of which are ever changing.  Getting stronger as you get stronger. These enemies fight among each other in order to rise in ranks in that zone.  Not only that, but as they level up more of their weaknesses disappear and more strengths replace them.  When I say that Orc will remember you, I mean it.  When you fight him again, he may call you out and say that you let him get a way and what a huge mistake that was for you.  Every zone has an endless amount of this style of game mechanics.  You may kill a Lieutenant but that spot will stay vacant for only so long.  War chiefs are a whole other ball game using Lieutenants as body guards.  This allows you the ability to use the Wraith System and see where the lieutenants are so that you can kill them first.  This makes that three boss fight a one boss fight or if you want a challenge a two boss fight.  But, god forbid you die.  Well, the good news is your best friends can avenge your death.  We know that each mob is unique, so if you get killed that character dies and the Mob can be ported into a friend’s game where he will get a mission to avenge you.  You get XP, he gets XP you both win.

The Time Line is between the end of The Hobbit and the beginning of The lord of the Rings trilogies.  You will be able to discover the origin of the Rings of Power and meet Smeagol.  Through Combat you can upgrade your weaponry to become legendary through a system of rune rewards that are crafted according to the player’s strategy and their unique enemies.

Graphics in this game are just beautiful and a sight that will take you in.  With over 15 hours of pure main story line missions not including the nemesis system, the sandbox environment, or side quests, you will see beauty designed to its fullest with the new Generation consoles.

In review you can guess my opinions of this game and where I stand on its place in the market.  I want to call it a Must Buy.  From a guy who only plays MMOs and FPS I cannot wait to get my hands on this game.  I would say that if my previous statement doesn’t convince you, realize that this is my first article and I volunteered to write this review which is over 1300 words at this point.  Please consider how new and singularly distinct each of the things I listed are.  Each one is new to the market and such a great way to keep the game evolving as you play through.  It will never be the same no matter how many times you go through.  Never will your mobs cap at 10 different styles.  Where else can you see an Orc armies upper ranks change and grow when you kill one of its officers.  Please keep an eye out and put some money away this week and be sure to pick it up at the end of the month.

Here is our interview with Bob Roberts, Lead Designer for Shadow of Mordor:

Overall, at first glance, I would think this game will score high in review; definitely something to be excited about and recommend picking up this holiday season based on our time with it. 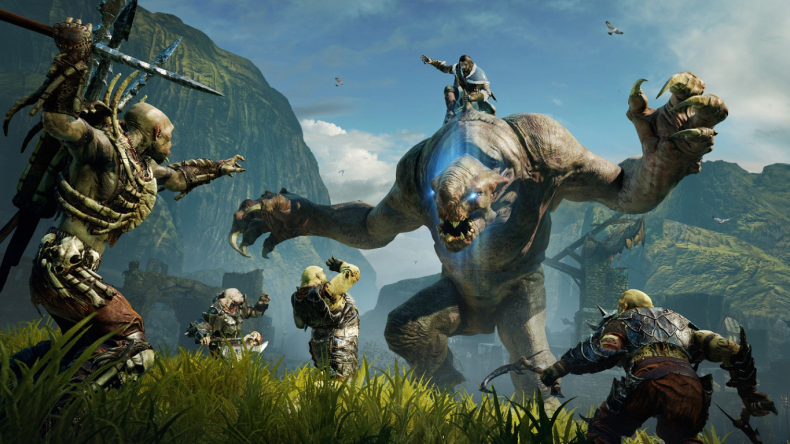 Warning: count(): Parameter must be an array or an object that implements Countable in /var/www/www.gamersledge.com_2015/html/wp-content/themes/flavor/functions/reviews.php on line 376

Tom and Todd Bombadil Sing the Entirety of Lord of the Rings A Capella
Be the first to comment!
Leave a reply »