Welcome to the second in the Thoughts on X series! Today I will react to Powers of X #1 (read the X as 10) by Jonathan Hickman. This is the second book in Hickman’s revitalization of the X-Man franchise. It partners in some way with the House of X books, and together they tell the entire tale of this relaunch. Last week’s House of X set an interesting tone, and a definite line in the sand about mutantkind’s future with humanity. I am going into this book totally blind, so without further ado, let’s get to it!

Powers of X #1, written by Jonathan Hickman, Pencils by R. B. Silva (Inks by Silva and Di Benedetto, colors by Garcia)

So a time element. Almost looks like how Jason Aaron did God of Thunder.

Ok, so that’s the time period of House of X.

Well that era has gone to crap.

This book also has descriptions of things and events that the audience has no baseline for. This era is bleak indeed.

While that is a known character, that is quite a different take.

Heh- -I missed that the first time, thanks world explanation! Also a soft ref to the Fox show The Gifted?

Well, mutantkind is in a bleak state at this time point.

Well that is another time jump, and well, that’s not a great outlook either.

I have to say, I’m not as big of a fan of this one as I was House of X. It’s always tricky to jump time periods, you get looks ahead that take away some suspense, but they also leave the questions of how and why. Most importantly, will these timelines persist, or be wiped out by the story as it moves forward? The art is great, and the story is fine, but it is one of those things that we won’t be able to fully judge till all the cards are on the table I fear. Regardless, I am still intrigued and looking forward to the remaining chapters!

Next week comes House of X #2! (I won’t get a copy till the following week, so we won’t have a Thoughts on X next week) 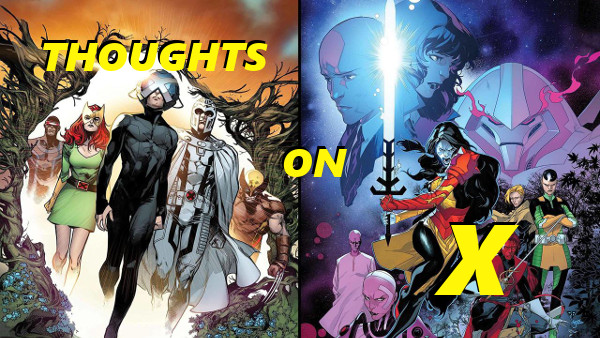