Borderlands.  If you haven’t played it, or know nothing about it, you can check my abbreviated review I did a while back here.

Basically, all you really need to know is that it is Diablo II in First Person Shooter (FPS) form.  It’s irreverently funny, well-designed and well executed.  For those of you that are loot whores (read: Vichaous), it brings out the best (worst) in you; you’re always looking for that slightly better stat gun or shield or myriad of other equipment.

The Zombie Island of Dr. Ned is the first piece of downloadable content (DLC) that I’ll be reviewing for the game.  It prices out at $9.99 and stars someone strikingly familiar:

Let’s just get into the format to do this justice.

Story: Without giving away any spoilers, let’s just say that the narrative is top-notch tongue-in-cheek.  I played this all the way through with Trial Access, and the story actually swings from completely absurd to reflective and regretful.  At one point, Trial told me he was now depressed, because he knew the outcome of one of the story arcs.  From beginning to end, ZIoDN has extremely well written dialogue and pacing, really adding to the mood of the place, where we get to explore Jacob’s Cove, in a remote area of Pandora.  The opening cutscene really sets the atmosphere for the entire expansion, and will have you smiling in no time.  The reward for finishing is just as strong, thankfully.

Minuses: You’re doing so much so often, sometimes you really need to just stop and listen to the story unfolding via audio clips.  If the game muted the other sounds a bit while listening to the recordings, that would help a lot.

Gameplay:  ZIoDN introduces… you guessed it, Zombies!  But there are multiple types of zombies, from kamikaze zombies to crawling ankle-biters to shuffling zombies… it’s a pretty diverse list.  Rounding out the cast of new villains are Tankensteins, which are VERY difficult to kill Frankenstein monsters, some of which carry loot chests on their back. 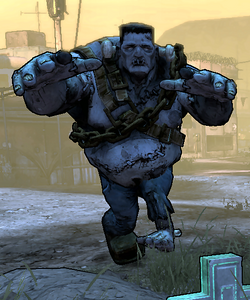 There are a couple other monster types, but I was VERY surprised at how large this gameplay area is.  It’s easily about 8 hours of very solid content, which is quite a lot for ten clams.  Not only that, but there are trophies and a claptrap storage expansion quest to be had within this expansion.

Plusses: Imaginative creature types that integrate well into the overarching story of the game (not just the dlc), new creature types keep you on your toes (Trial somehow managed to get his avatar to jump like a scared girl repeatedly).

Minuses:  Final boss rarely drops anything out of the ordinary!  Cannot repeat content once you’ve finished it (ala 2nd playthrough).  Only by joining friends can you experience all the content again.

Graphics/Audio:  Just wow.  While this title is no Final Fantasy or Heavy Rain per se, it does what it does well.  The developers have *nailed* the atmosphere of creepy Halloween-esque locales and the audio really plays into this as well.  Those old enough to remember certain Mystery Machine traveling sleuths will have some great easter eggs to find throughout the gameplay, as well.  Literally the ambience and quality of the work by the devs shines through here in a way that few games achieve; a total immersion into the game.  It’s just that good.

Summary and Score:  If this is the future of videogaming (downloadable content to extend the life of a title) then Gearbox should be looked to as an example of how it can and should be done correctly.  From the time you start this piece of DLC until you finish it, you will have an above-average experience, from locales to voice acting.  If you own Borderlands, this is a great alternative instead of a second playthrough for the main title (especially since you’ve done it once already!) and is perfect to get you up to the game’s built in level cap of 50.  I cannot state enough that this is an extremely fun and well-written side quest for the denizens of Pandora, and you owe it to yourself to experience this story.

Won't you join us?

Liked it? Take a second to support Mark Bohdanyk on Patreon!

Borderlands' Handsome Jack on Being Your Favorite Jerk – Up at Noon