Well, due to family health issues, all my games and normal stuff is on hold for a while. So I will try to post once every few days as I can; probably late at night. I need to catch up on some reviews, so tonight’s first batch will be a bunch of iPhone products I’ve been meaning to hit up for a while.

1. Twitbird Pro. I am usually a fan of free, but all the apps I’ll be looking at today cost something. If you’re going to pay for a twitter client, this should be it. Fully-featured and robust, this little tweetbox is singing a happy song. Direct messaging, retweeting, even searching for nearby tweets to find folks you don’t know in your area are among the featureset of this app. Add push notification with a clean and easy to use interface, and you’ve got a well-spent $4.99. For those of you who like to double-thumb, the app supports landscape mode, as well. It also shortens URLs, let’s you follow web links without leaving the app, allows you to archive links for offline browsing/reading and gives previews of attached pics inside the tweet. 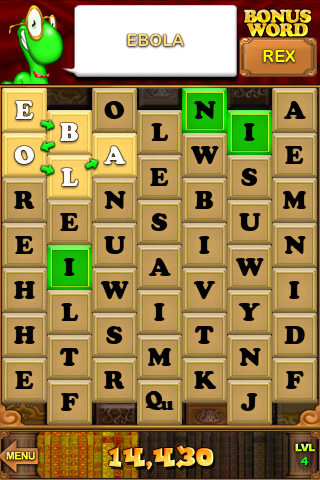 I’ll be the first to tell you when I scooped this up on sale for 99cents (normally $4.99) I was doing cartwheels, because I *thought* this was Bookworm Adventures. Sadly, it’s not. But it’s almost as enjoyable. You play as Lex, a bookworm; and your goal is to make words out of chains of adjacent letters. The longer the word, the more points you get. Different modifiers exist when blocks turn different colors, and you get bonus points for completing premade (unknown to you until you get one from them) lists of words. Example: List of colors (you’d find this out when you spelled blue, for example). The game ends when you let a block that’s on fire hit the bottom of the board (they burn through the letters beneath them every turn). It’s great fun; great exercise for your vocabulary and a great time waster. Popcap makes this, so the quality is definitely there.

3. Ultralingua Dictionary English–> French.
This is the heavy-hitter on my list, coming in at a $29.99 pricetag, and worth every penny. When I went to France last year; I didn’t know the language at all, and I was lucky to have a penpal who spoke very fine English show me around Paris. Having been to other countries where I didn’t speak the language, an English to whatever dictionary is fantastically useful, if annoying to carry around. Voila! Let’s get an iPhone version!
For anyone who’s ever used a bound version of these, what’s nice is they are generally split into Eng –> whatever and whatever –> Eng. So if you hear a word you don’t know, you can go and look it up. This program features that capability as well.

You can even edit the entries! If your friend tells you: Yes, that’s right, but noone would ever say that, then you can edit the entry right then and there! Awesome stuff. I’m definitely picking up the Japanese one when it comes out (unfortunately I have yet to see a valid/worthwhile entry on the app store). If you’re heading somewhere and want to speak with the natives, they have plenty of different versions for many different languages. Just don’t do what I did. Make sure you puchase the XX–>English Dictionary and not just the XX Dictionary. Reading French in French… not so useful. 😉

See how swiss-cheesed your brain is.

So I’m a giant geek. No surprise/newsflash there. One of my favorite TV shows of all time (of which I own almost all of) is Quantum Leap. This little 99 cent app turns your iPhone into Al’s handset to communicate with Ziggy. Apparently due to copyright, he used *similar* sounds, and not the real deal, but it’s close enough that it’s amusing. And yes, if you knock the headset with the palm of your hand, it makes the whirring noise. All I need is a cigar to put in my hand as I scrach my head and try to decipher the output. Oh boy. 5. Tricorder-TR580
Just wow. If you wanted to make your iphone into a kickass tricorder, look no further than this 99 cent app. Using no IP infringement whatsoever, this thing is jamazing (so amazing it warrants a j at the beginning)! Great sounds, and in the latest version, if you have location positioning turned on, it will actually mfing SHOW you other people in your area using the application..you can detect them with your mfing tricorder!

I only got about halfway through the list, so there will be another post soon. For now, Excelsior!

Liked it? Take a second to support Mark Bohdanyk on Patreon!