LGM Games and Iceberg Interactive announced the latest content to their space SIM Starpoint Gemini Warloards. Cycle of Warfare will be the largest content drop so far and will expand the current content by over 100 hours which includes additional conquest and scenario game play. The Gemini system will be opened for players to launch their conquest in the system as one of three factions all with their own rivals to contend with.

New challenges and dangers loom for players as new game modes allow players to modify the rules in different ways that move them away from empire management and towards a more dangerous game play; risk vs. reward?
Stay tuned as Gamersledge reviews SGW – Cycles of Warfare and everything this space SIM has to offer! 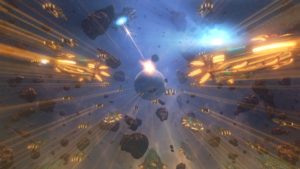