For those of you who are new to Starpoint Gemini Warlords, or SGW as its commonly referred to out there in the vast space that is the internet, is a Space SIM mixed with a bit of role-play structure and elements. Even though we’re technically reviewing an expansion to a previously released game this was my first dive into the universe that SGW has created. For new military commanders or returning decorated veterans, this space SIM has something for everyone to get them hooked, and oh it did get me hooked!

There are a few different modes for this game that you can enjoy but for the most part, for new players, you’re going to spend the vast amount of your time in the story mode. The story mode basically throws you into a large military conflict where you have to rebuild your armies, get bigger and stronger ships and lay waste to your opponents and eventually overtake the universe to become the dominate force.

This has a cross of a strategic RTS where you need to manage your fleet of ships to make sure you don’t take on too much while you also have to seek out and maintain your resources. There are many ways to handle this depending on your preference of game play. Are you a trader by nature? Buy the larger freighter and learn trade routes. Maybe you’re a space pirate, board the big ships and add them to your fleet or sell them for profit. There’s something for everyone in this SIM. 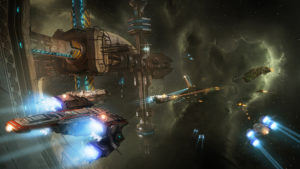 I’ve taken some time away from the PC Master race but even though I have a long history in computer gaming, SGW throws many things at the player that I ended up having to google. You can view this one of two ways; they do a great job at not designing a game to be so simple that anyone can do it without any trouble. Or, they do a terrible job at their tutorial. I can easily see how some people will love this and others not so much. Regardless, if you’re willing to stick thru start of the game you will find this game can be quite rewarding.

Many features of the game, whether it is advance weapons that you use as clicky items in your inventory or the board and capture function that just isn’t obvious at the early portion of the campaign. If you aren’t one who explores every button, feature or menu option; there are many useful tools that will go untouched for most of the game. That is something I personally did not enjoy.

Overall the design of the controls, combat and general features is complex enough that I felt like I got “better” as I played but there was a pretty steep learning curve which could deter people from really enjoying the early gameplay. At times, I felt like the controls were clunky and hard to adjust to but it was ultimately something that got easier with time. Overall, extremely fun to play and quite satisfying to eventually just decimate entire squads of enemies! 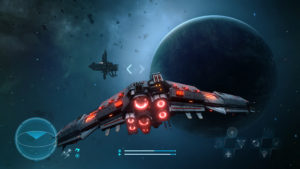 Presentation is definitely a place where this game shines. From looking at earlier iterations of this game they really stepped up the graphics. From the level of detail of the ships to the explosions that are going off and all of the laser, missile and turret fire; this is nothing short of beautiful to play. I found myself in awe of how much was going on all around me when we were having massive battles for entire planets.

You start the game with a tiny little ship and thru the progress of the game you eventually find yourself in a Battlestar Galactica style space destroyer. Oh, and if you’re a fan of BSG, I found myself constantly feeling like I was in the universe of Commander Adama. From the Music, ships, aliens, combat; for me it really played on my emotions from being a fan of the recent remake.

The only drawback I found was the placement of the planets. Because this is a fully 3-Dimensional space game you can move in any direction, in and around any object of the game; except planets. This only seemed to be a problem when you were trying to drop out of hyperspace near a plant and/or you were trying to fly past one to deal with a point of contact on the immediate other side. Overall, this was a minor drawback to an otherwise amazing and beautiful universe.

As sure many probably expect, this is a “Pay admission for the gameplay and get a free side of story” type game. We’ve seen this more and more within the industry, The Division, No Man’s Sky, Destiny just to name a few; and for me if the gameplay is good enough then I’m ok with a less than stellar(get it!) story.

SGW follows the same routines as most others do; talk to someone, go here and scan this or blow up that only to find out it’s not actually what you need and then you need to go somewhere else. They try to keep you engaged by throwing in a few twists and turns, a few unexpended events; but for the most part it’s pretty dry and I found myself skipping thru the dialogue. Lets be honest, for me the game was about blowing **** up!

If you like a deep and rich story line, then maybe this isn’t for you but gameplay and presentation is enough to take you home! 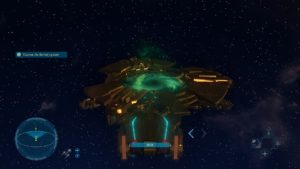 Overall I found this game highly addictive. Given my schedule these days it’s hard for me to play something for extended periods of times and with SGW it allowed me to play 5 minutes or 5 hours without sacrificing anything. In fact, leaving your game just up and running was a great way to build resources (just a trick for you guys)!

Play thru the story line, skip the story and just go for space domination or try the new mode that they introduce in this new expansion where you’re trying to eradicate all life in the universe; there’s something for everyone.

I give this space fleet a