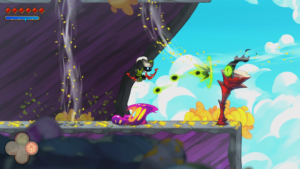 Too Kind Studio unleashed a charming classic style 2D platformer on the PS4 this week called Pankapu. You play as a hero of the dream world Omnia who is tasked with ridding the land of evil by battling your way through a myriad of colorful stages, collecting baubles, leveling up your abilities and doing everything a good 2D platformer should require of you.

If you are a fan of 2D platforming action, Pankapu delivers a satisfying romp with a decent array of abilities that you build as you play through the story, including different armor sets which completely change your mobility and attack style. If you want to survive, you need to balance offense and defense. Basic weapon attacks will only get you so far, as many enemies require some defensive strategy. Additionally, blocking enemy attacks with your shield help to replenish a special ability bar so you will be relying on that technique quite a bit.

The game ramps up the difficulty quickly so if you are looking for a good old school challenge you should be happy. Enemies don’t let up as you level up your health and abilities. You will rarely feel over powered in this game and mastering every new skill is a must.

There are some unfortunate issues, however. The game has an odd way of scrolling the screen as you reach the edge which can sometimes interfere with your timing especially if you are floating back and forth to attack an enemy or stick a landing on a small platform. This caused a lot of additional hits and even some deaths. I also found myself wishing you could switch controls to allow you to use the digital pad for movement. It’s a personal preference but I tend to like that better for old school style platformers.

There were additional performance issues in the game where the framerate would stutter wildly, rendering the game pretty much unplayable until you restarted, which would result in a bunch of lost playtime. Performance issues that prevent precise timing and movement in a platformer really makes it difficult to get through the game. I even experienced a complete game crash at one point. Hopefully they address the performance issues with some patching. As it stands right now, it’s tough to slog through the levels with the random stuttering really hampering your ability to complete the levels. 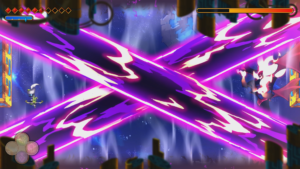 Pankapu’s dream world nature of Omnia creates a fantastical environment for storytelling which includes plenty of magical characters and witty banter. As you play through you get fragments of a real-world sub story that adds to the overall experience. The bulk of the Omnia story is reasonably standard adventure fare with some clever writing and quips thrown in for good measure. It does an admirable job keeping your interest as you progress through the levels but isn’t the stand out feature of the game.

Pankapu really shines in the audio / visual department. I love the art style and animation of this game and it really takes full advantage of the dream world setting. The character of Pankapu has a unique look by default but I greatly preferred the “Dream” skin you could select. The worlds are colorful and feature plenty of variety along with some nice small touches such as platforms throwing off a puff of glowing particles when you land on them.

The presentation is solid throughout the options menus, shown as book that you flip through, giving you access to any options, information, maps, etc. It helps keep up a consistent theme throughout and looks great.

Pankapu is no slouch in the audio department. The mellow soundtrack really sets the tone for the dream world of Omnia and adds to the overall feel of the game. When there is voice acting it is well done and I’m a sucker for solid ‘fake’ language filler for mid-level dialogue boxes. Additionally, just as there are nice little graphical touches in game, there are subtle situational sound effects such as the drum-like platforms playing different percussion effects as you land on them which are appreciated. 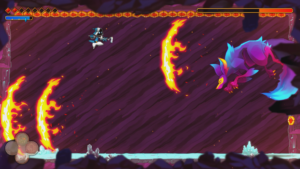 Pankapu is charming game that I wanted to love, however the technical issues on the PS4 really hampered the overall experience. The gameplay is fun, graphics are wonderful and it has excellent music to enjoy.

Charming story Fun Characters Old-School Platforming
Odd scrolling, that can lead to deaths Performance issues that can hopefully be patched
Final Verdict:
5.0
User Verdict:
—
You have rated this
The gameplay is fun, graphics are wonderful and it has excellent music to enjoy, but performance issues make it hard to continue playing.
More details:
0 people like this
Burgundy, Featured, PlayStation 4, Playstation 4 Review, Sony, videogame review
pankapups4too kind studio

Gamersledge Videocast, Vol 3 Ep. 275 – The Calm before the Monster Hunter
Be the first to comment!
Leave a reply »