The EU PlayStation Blog has inadvertently leaked a previously unannounced character pack for Marvel Heroes Omega, the free-to-play dungeon crawler based on the Marvel Universe. 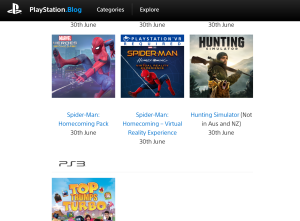 As you can see in the image above, it lists a Spiderman Homecoming pack, but attempts to click through to the PlayStation Store shows as broken, with “Nothing to see here, folks.”

Could consoles already be getting an exclusive costume that PC players won’t have access to?

We already know from the post (which has now been removed) that due to renegotiation of the Marvel license for console, all versions will have Silver Surfer and the Fantastic Four removed by July 1st. While there is some hope that the five characters (Silver Surfer, Mr. Fantastic Reed Richards, Sue Storm and Ben Grimm (the Thing)) will appear on console for the launch of the full version of the game on June 30th for purchase and then be removed the following day, odds are slim of this happening.

Let us know your thoughts in the comments below.