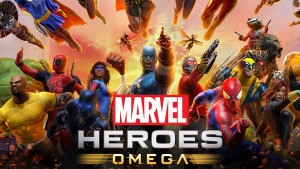 Marvel Heroes Omega is a free to play game on PlayStation 4 and soon Xbox One. In short, it is an extremely fun Diablo clone with several notable features – the first being that this game supports both couch co-op multiplayer AND simultaneous online play. This means up to two people can play on a single console (both players require a PSN log in/sign in), but still be grouped online with other players. Just be aware that all items picked up by the second player and any progress made goes to the first player’s account and manage accordingly.

The second notable feature for Marvel Heroes Omega is that it’s like Diablo with microtransactions. This guide is to help you spend money wisely (support Gazillion, the developers, but don’t go crazy (IE don’t spend $200 to get Iron Fist and Black Suit Spidey when they are simply timed exclusives and you can purchase them for $15 each at a later date) and to help you plan out a roadmap to the current endgame.

The third notable point is that Marvel Heroes Omega is ridiculously fun, albeit flawed. It IS still technically in Beta, but when the game ‘goes full launch,’ there will be no server wipe/character reset. Anything you do now will serve you throughout the time you play. But there are MANY things (mostly quality of life issues) that are broken. They worked in the previous closed beta, but are now non-functioning. The purpose is not to dissuade you from downloading the game, but it is a work in progress. The comparison arrows on items aren’t working (you have to look at everything you pick up), multiplayer works, but there’s no real reason to do it (other than it’s more fun to play with friends) and it doesn’t work well (local coop player cannot save individual progress, online coop players can’t see each other’s story goals/quests).

That being said, those of us in the office that play are constantly playing multiplayer and having a blast with the game, flaws and all. Just be forearmed with the knowledge that it IS a work in progress. On the PS4, you can get Daredevil for free (even without a PlayStation Plus subscription – but you do need the subscription in order to get his alternate outfit/costume). Be sure to pick him up for synergies, which we will discuss later on. When the Xbox One version launches on June 20, expect to see the same offering.

Once you complete the in-game tutorial, you will be awarded 525 Eternity Splinters. This is the in-game currency that allows you to unlock characters. 525 is enough for the majority of characters, with the exceptions being more popular characters like Iron Man, Deadpool, Spider-Man, Rocket Raccoon, Jean Grey and Wolverine, which each cost 725 Eternity Splinters instead. Don’t worry, however, as there are many Tier 1 and Tier 2 characters that fall in the 525 or less category. If you are planning on playing local couch co-op with a friend/sibling, my best recommendation is to purchase Squirrel Girl and Nova (each costing 225 Eternity Splinters). Based on the current endgame, here are some of your best choices:

And while I’ve left many characters out here, if you want to enjoy the game but not have to worry so much about grinding for gear, get a character to level 60 and through the cosmic trials, this is the group you have to work with at the moment.
That is NOT to say you CANNOT do it with any of the other characters – what I’m saying is know what you’re getting yourself into. There are balance issues that make most of the other characters require a LOT of grinding to find the right gear in order to advance.

What about those premium characters?
Yeah, they’re premium for a reason. Jean Grey, Rocket Raccoon, Deadpool, War Machine and Wolverine are Tier 1 characters that can easily see you through to endgame, with Rocket being the easiest.

If you are looking for a paid character, War Machine as a PSN exclusive for $16.99 is your least expensive choice – and you get 500Gs. The X-Men pack at $60 seems excessive at first glance, but for those who purchase, you’ll find you have Storm, Iceman, Psylocke, Beast, Jean Grey and Ole’ Canucklehead Wolverine. You also get alternate costumes for each one and a series of very, very valuable ‘Combined Boost’ items for endgame that can help you obtain Legendary Items for all your characters in a matter of hours rather than weeks. More on Boosts in the Endgame Section. Lastly, in this pack you get $20 of in game real money currency (G’s) for purchasing characters. So for $60 you get three Tier 1 characters, super-valuable endgame boosts AND the ability to buy some other needed items for making your life easier as you play. 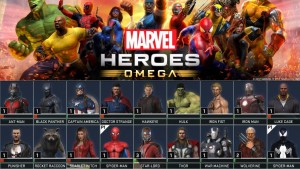 Angela
Oh my god she’s going to get nerfed. She basically allows you to make bad guys fight each other with a 2000+% bonus buff to damage when they do. Easily the best character to farm endgame bosses / patrols with. I have heard She-Hulk is even more powerful with a similar tactic, but have yet to play her.
Angela is more challenging to play against solo bosses for story, so her Cosmic trial won’t be a cakewalk.

Squirrel Girl
Summon a billion squirrels for damage over time, and add one of the strongest close-combat characters in the game.

Rocket Raccoon
Between Groot and all the turrets you can set up, combined with the artifacts you can get at levels 50 and 60 that give you MORE summons and buffs to your summons, you should have no problems passing your cosmic trials here. Most likely the easiest in the game.

Storm
Perhaps the squishiest on this list next to Jean Grey, she is a chain lightning area of effect clearing badass.

Jean Grey
Check your talents at level 1 – she’s the only character that has a talent available at level 1, she can manifest the phoenix force. In doing so, it changes all her power to fire, so make sure to find appropriate fire-enhancing gear for her. 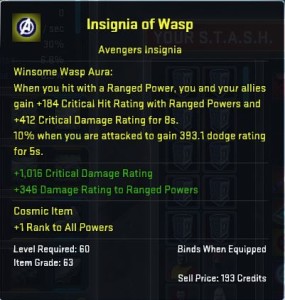 Marvel Heroes Omega has multiple difficulty levels. Did you just beat Story mode? Huzzah! You just cleared a tiny portion of the game, because you beat it on Normal. Doing the Heroic Trial unlocks Heroic difficulty, where you get an XP and item find boost. Once you’ve cleared the Heroic Trial, you can try the Super Heroic trial. Once you beat that, the final unlock (for now) is the Cosmic Trial. Beat that and you can play in the mode where Cosmic items drop like candy when you beat bosses. This is pretty much the end goal of any character you play, to work towards beating the Cosmic Trial so that you can get the best gear possible. 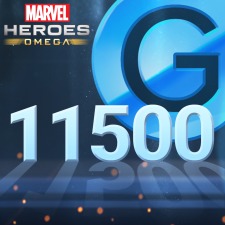 What should I spend my hard-earned, real world money / Gs on?

There are several things I will suggest you spend your hard-earned cash on beyond characters. Characters are really up to you – characters require about 90-120 hours of playing to get 525 Eternity Shards to unlock a character. 160-200 hours to get the 725 for a premium character. Or if there is a character you REALLY want to play, you can buy it – BUT make sure you play that character to level 10 (you can play all characters up to level 10) to see if you like the playstyle before you spend your hard-earned money.

Beyond characters, there are a couple other Quality of Life items I would recommend. First, the Inventory starter at 100G to get 10 additional Inventory slots. Second would be the Stash starter at 500Gs to get 50 additional stash slots – all your characters share the same stash; this will fill up quick – especially with crafting materials and artifacts for future characters.

The only other thing I would consider an absolute ‘must’ for real world money is 1-2 stacks of combined boosts, if you didn’t get them in a founder’s pack. These do specific things for you – first, it increases the amount of XP you earn. Secondly, it increases the number of Legendary Marks you receive from defeating a boss and lastly, it accrues a S.H.I.E.L.D. Supply box meter next to your XP bar. When this meter fills, you get one box. Inside these boxes will generally be Cosmic Items (even if you haven’t beaten the Cosmic Trial) and some of the rarest artifacts in the game. You cannot open these boxes until your character is level 60. 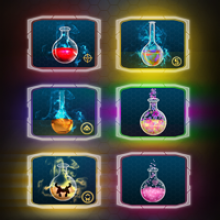 There is a lot to go into here, but before I do; let me mention that this quick guide is mainly designed and reserved for endgame content. Meaning that you have beat Story Mode and are level 60. Once you have a character to level 60, whether you have beaten Cosmic Trial or not, you can use these boosts to help progress your character. You CAN do this without spending money, but this GREATLY lessens the amount of time required.

Recommended use of these boosts: Go to a WayPoint and choose Patrols on the left side of the screen and highlight the midtown Patrol option. Make sure you have at least done the Heroic trial successfully and press square to change the difficulty to Heroic.

“Wait!” you say. “Don’t I want to be on the highest difficulty?” No. If you were farming gear, yes, but what you’ll be farming using boosts are S.H.I.E.L.D. boxes and Legendary Marks. The boxes are based off kills, as are the marks, so we want something fairly easy that our charactes can maximize the amount of kills in the shortest time. The only reason I don’t recommend Normal difficulty is that we have had issues in the Beta with some Legendary Marks not dropping on Normal.

Once you get to Midtown, look at the top of your screen to see how long until the next event. As the event starts, use your combined boosts. Go kill the bosses. As soon as you are done, note how long until the next event and then IMMEDIATELY bodyslide back to Avengers Tower. This pauses your boost timer (it doesn’t count the time you spend in the tower against you). So if your boost lasts for 120 minutes, while you are in Avengers Tower, no matter how long you are in the Tower, it will not run down your boost clock. When most of the time until the next event has passed, bodyslide back to Midtown and kill the bosses. Repeat until you are out of time.

Also a quick FYI, if you are currently using a boost and decide you want to try a trial (like the Cosmic Trial), the boost will pause while you do so.

Maxed out a character at level 60 and beaten the Cosmic Trial? Already have the best gear? What does Marvel Heroes Omega offer for you then?

Prestige
You have a few options. First, you could Prestige. By purchasing a level 60 item from Clea in Avenger’s Tower, you can reset your character to level 1. It locks all your current gear, gives you a small rewards box and takes 25% longer to get your character back to level 60 (you do not have to redo the trials again). It will put a small token next to your character’s name (it’s supposed to change the color, but currently not functioning). You can prestige 5 times. As it stands currently, there is no purpose other than status to do this.

If I decide to play Rocket, he will receive this passive bonus.

Who is your favorite character so far? Did you know Villains and more characters are coming?
Check out the entire list here: Full Hero List

We hope this helps you get started on your Marvel Heroes Omega journey! As always, leave your comments/thoughts/opinions below on builds, who the best character is and tips/tricks for others!