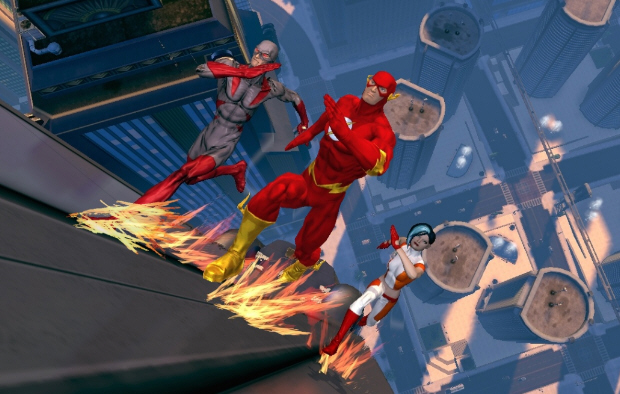 DCUO Speeds out of the gate into history. (You’re welcome, TrialAccess)

So TrialAccess and I have been in the beta for DC Universe Online for about a month or so.  I actually came in with very low expectations, and was interested to see how SOE would tackle the rich background of the DC Universe.  I’m going to be as extensive as I can be with this review, especially since the game hits store shelves less than five days from now.

Tonight was the very last night of the Beta, and I wanted to chronicle as much as I could while it is fresh.

I want to say that we both tried both the PC and PS3 versions.  We both ended up *preferring* the PS3 version ( a first for any MMO for me personally).  The controls were just wonky on the PC in my opinion, you could not change them, and the PC version is actually a port with modifications from the PS3.  (Also a first as far as I’m aware) You can template your character after some of the famous heroes and villains (yes you can template off a villain even if playing a hero) from the DC Universe.  Doing this sets most things including your costume for you.  Or you can go the custom route and make your own.  For those of you wanting direct comparisons to City Of Heroes or Champions Online, the character creator is much more shallow than those systems, but still very gratifying.  It doesn’t break any new ground.

Once you’ve chosen a power set and a weapon set (powers are different from weapons), then you choose a mentor.  Superman, Wonder Woman or Batman on the heroes side, Joker, Circe or Lex Luthor on the villains side.  These only reflect where you start and your story path.  You can do the other mentor’s quests as you proceed, and in fact there are rewarding reasons to do so.

Of note:  There is only one character of a specific name per server.  In other words, if you want to be Mr. Wiggles, and there already is one, you’ll have to resort to 3117 speak to make Mr. |/|iggles or Mr. W1ggles or Mr. Wi66les or somesuch.

TrialAccess sat in with me as I wrote this, and here’s his take “I wish that there were more options for instance, more clothing types (there are maybe around 30, but it felt like 15.  I wish you could change your color palette per piece of gear.  As of right now, you only have three colors in your palette to work with for your entire body.  I do wish there were more power types you can play; I feel that to be a superman-type character, you shouldn’t have to be ‘ice’ type.  I was able to make the characters I wanted, however, just not to the level of details to be exstatic.  I REALLY love the options for templates for characters, choose my mentor and I’m done.  I love that option.”

The powers sets are not very deep.  I do personally hope this is something remedied in the near future, as well.  As of right now, there were fire, ice, mental, nature, sorcery and gadgets.  Each of those is split into two trees.  For example, I had a sorcerer who had summoning and destiny.  Destiny was buffs, while summoning was what it sounded like.  Trial Access had  Gadgets, which had Tricks and Traps.  Tricks were devices in plain sight to deceive the enemy and traps were stealthy devices that remained hidden until sprung.

The nice part is that starting at level 10, you can draw powers from the “Iconic Powers” pool.  These would be things recognizable from any of your well-known DC heroes and villains such as:  heat vision, ice breath, amazonian bracelets, word of power (shazam!), venom boost (Bane), super-strength, mystical lasso, triple batarang, pheromone bloom, robot sidekick, etc.

Both Trial and I are confident that there will be more power sets in time.

Weapons are your standard method of attacking and as you gain skill points, you can level them up to do more combos that either juggle or knock back your enemies.  They include one-handed weapons, hand blasters, bows, brawling, dual pistols, dual-wield weapons, martial arts, rifle, staff and two-handed weapons.  I played with hand blasters and loved it, once I figured out what the best purchases in the tree were.  TrialAccess did brawling, and loved its progression.  With the combos, it felt really fluid.

Movement skills are broken down into Flight, Acrobatics and Super Speed.  You use skill points to access the various boosts and enhancements for these, including things like power dive attacks, super speed vortexes and the like.  Super speed is the bomb, letting you run up buildings and is hours of enjoyment.

I don’t have a lot of non-subjective things to say about this, so let’s cut to the chase:  The storylines are fantastic.  I played mostly villains in the beta, and chose Circe as my mentor.  The voice acting was fantastic, and your overall narrator on the villain side is the Calculator.  He’s the evil equivalent of Oracle on the hero side, helping guide you through the social hierarchy of this new and strange world you have been thrust into.  As you complete chapters in the story, you find yourself heading to new and varied locations within the city.  The scenery is spot on, the atmosphere feels correct, the small details are all in place, I felt like I was actually playing a well-written comic book story.  Each main section has a fulfilling ending that makes you feel like you have had a significant impact on the actual world.  There is quite nothing like kicking Wonder Woman in the ribs repeatedly after you’ve beaten her down on Circe’s behalf.  TrialAccess absolutely loved teaming up with other folks to take on Bizarro, hearing him tell you that you’re his best friend (obviously, that’s why he’s attacking you!)  It should be noted that isn’t a main storyline quest, it’s a Bounty hunter quest (he’s somewhere in the city, you have to go find him).  As far as other types of quests, there are Alert missions, which are self-contained, multi-stage stories that are instanced, and you queue up for them and join with your team and random other players.  Those are also well done.

TrialAccess:  Even individuals not well-versed in the DC Universe can appreciate the level of detail, as most of the ‘end bosses’ have dedicated cutscenes introducing them that are VERY well done.  (Balth agrees!)  It’s worth plowing through a chapter just to see tose.

Metropolis is the sprawling, urban cityscape you would expect it to be, save for the Braniac invasion having demolished parts of it.  It is always day in Metropolis, and you will find yourself staring in awe at this city come to life from the pages of comics.  Polished and shining bright would be the way I would describe it.

TrialAccess says: It was like flying around in the old cartoons or comic books.  There were specific landmarks and parts of the cityscape that I was looking for and found easily.

Gotham is the tightly-packed, older city where it is always night, and the city is always dangerous.  Who knows what shadows lurk in the hearts of men around that corner?  It is breathtakingly beautiful to fly up against the moon and see the cityscape below you.

TrialAccess says: Shadowed across the night, I could make out the silhouette of Arkham off the horizon, and then super speed there.  ‘Nuff said.

Let’s talk about probably the best thing they did right:  The voice acting.  If you IMDB the voice actors, everyone you’ve ever wanted is voicing the characters in the game.  The quality is amazing.  Every NPC has voice.  Even if they don’t have anything to say to you, it’s full voice.  It’s about time.

But let’s also talk about what doesn’t work, or at least work quite right in the game for a moment.  It froze.  Much less after the last patch, but when the server had a strain for the Jim Lee beta end event (he twittered to me he’d make me cry from the beatdown he was going to give me, but instead I cried from the server lag and disconnects) it was BAD.  I hope they increase the server count to preven from that becoming an issue moving forward.

TrialAccess fell through the ground six times and was swallowed down to hell where he deserved to be, like six times in one day.

Sometimes I would get caught in the ‘picking an object up’ animation and could no longer move, attack, etc.  Only cure was to log out.  Sometimes your character would bug and you’d lose the ability to do ranged attacks (pretty important when you only really have two types of attacks; close and ranged).  Logging would be the only cure.

TrialAccess says: I don’t know if this is a quip or a qualm, but playing a villain makes you feel like you are a villain.

Take that for what it’s worth.

Lastly, the level of detail in the game is staggering.  The amount of care and nuance you’ll find in the game is both breathtaking and shows that the developers really do care about the world.  You’re constantly finding something new around every corner.  You’re noticing something you missed initially, every time you look.  It truly is a monumental game, and I very much enjoy the mechanics, feel and style of the game.  Is it perfect? No.  Do I think they are jumping the gun a little with such an early release when they had originally planned to push it back to March?  Yes.  Is that going to stop me from buying it?  No.

They have just announced there will be a $199 lifetime subscription for the game, but that PS3 cannot yet get it because that is too large a sum to be transacted through the PlayStation Network.  I fully expect that will be rectified before the end of the month free trial period that comes with the game.  I’ll have mine purchased as soon as it is offered.