Gamersledge Doctor Who Review: Into the Dalek

Hello again, and welcome to the next installment of the series 8 of Doctor Who, ‘Into the Dalek’! Trailaccess here, very late, to share thoughts on the show, and where I think things are going from here! As Neo’s reviews, I will be publishing this review in two parts, a Spoiler free main body, and some spoiler laden thoughts at the end. So, without further ado, Ever Onward!

The show starts with the same new opening, we have seen in the past the opening credits change between the first and second episodes, this isn’t the case for this second episode. I personally like the opening, it doesn’t have the TARDIS rolling around in a storming time vortex being stuck by lightning like something from a bad bill and ted scenario, and I like that is focuses on the Doctor’s eyes, to me, this is where we see most of Capaldi’s character. How he emotes with his eyes help me to see what this Doctor is all about.

Anyway, We start off with a small space fighter being chased through some asteroids by a much larger ship. the larger ship seems to have quite the advantage. Inside the fighter, we meet Journey Blue, a female rebel fighter who had just lost her co-pilot/brother. How could the doctor resist? After her rescue and return to her main base, the doctor is escorted (some might say forcibly) to the location of the Base’s one patient (the base used to be a hospital, its not important). The patient is a defective Dalek, a Dalek the Doctor is more than happy to leave, until he learns one important thing. The Dalek seeks to destroy all other Daleks. It is damaged though, and the rebels hope to repair it so that it can be used in their war against their hated (and hating) enemy. Meanwhile, we see Clara back in her teaching career (possibly the same school she was in near the end of last series, the same school that heralded our first companions out the gate in the 60s?). We also meet Mr. Pink, a mysterious prior soldier with some PTSD over things he had to do while in combat. This character spoke to me directly as a member of the armed forces, and I have seen too many friends come home with some of the same issues. I thought his character was interesting, fun, and I look forward to seeing him in future episodes (the actor has signed on for several this series). Clara meets Mr. Pink, and their banter is priceless. Then the doctor shows up with 10 minute/3 week old coffee (timey-whimey), and declares that he needs Clara’s help for something. This is where we finally hear the doctor with the line from the First big trailer, “Am I a good man?” They make their way back to the Rebel’s base, and back to the Dalek, but not before Clara finds out the reason the Doctor needs her (and also the namesake of the episode). Should he help the Dalek? In order to complete the mission, the Doctor, Clara, Journey Blue, and a handful of other soldiers from the rebel base get miniaturized and placed into the Dalek’s casing in order to see if they can fix the main damage. It is very ‘Fantastic Voyage” with a team of observers watching the team as little dots on a large digital schematic of a Dalek. The sets are okay, they sometimes felt rushed and begged the question, “why would a catwalk be made there, do Daleks often have miniature bipedal lifeforms inside of them?” The dialogue, I thought was very good for this episode, and the acting was there as well, but I thought the overall plot, a Dr. Whoniverse take on Fantastic Voyage felt very much like an RPG Gamemaster that ran out of adventure Ideas and started to build games based on some of his favorite movies. The Reasons for the Dalek’s damage, and some of the reactions from the cast were very well written, and quite beautiful in part, but there were some scenes I felt they could have cut and it wouldn’t have made any difference, it may have even allowed some parts of the Episode to flow more smoothly. All in all, I would give this episode a 6.5 out of 10. I found it entertaining, but it barely kept my attention, and there were areas of the episode that had me scratching my head, as they felt over produced and not thought out very well. I wouldn’t take this episode as a be-all end-all for this season, and I will absolutely watch more of this new doctor, I just feel that this episode was not the best Dr. Who story ever written. Feel free to leave some disagreements in the comments, let us know what you thought! 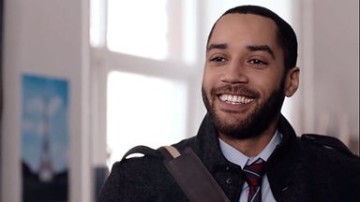